Back onto analytical views, today I’m going to demo using calculated fact measures in analytic views as opposed to standard fact measures.
You may recall from my Introduction to Analytic Views post that we can create simple fact measures within the fact table itself as follows.

Useful, and with a bit of manipulation, subqueries etc. we can do quite a bit with that basic measure using plan SQL. There is however no need to go through all that effort. Analytic Views support Calculated Measures, and that makes them a whole lot more useful. Taking our model used previously we can quickly and easily extend it to include many more derived measures; and these functions extend out far further than the existing Analytic Functions available in database <lt; 12.2 (although you will note syntactical similarities). We can build measures based on the hierarchies with the AV, and even on levels within the hierarchy. So to add a simple measure of Sales Year to Date, it’s as easy as:

Breaking that statement up a little:

Querying the view for one employee: 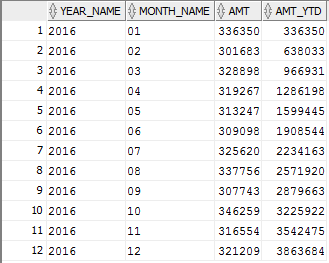 We can do far more than that though. What if we wanted to see employee sales for just Qtr 3, but comparing them to Qtr2? We could write subqueries, pivots etc, or we could simply do this:

With our query becoming

There are many , many other examples of things we can do such as (but not limited to) percentage shares of dimensions, lag percentage shares (i.e. how has my percentage share changed compared to last year?), and a whole host of things based on hierarchy levels and ranges.
Now that the SQL Reference for 12.2 has been released, hopefully we’ll see some more exotic examples of what can be achieved with AV’s, although we may have to wait until on-premise is made available before things really start to take off.

This will be my last post for 2016 so Merry Christmas and a Happy New Year to all.