So a couple of weeks back I had a quite an exciting moment. Why? Well I downloaded myself an E-Business Suite R12.2.4 Vision virtual machine from Oracle E-Delivery.
After the initial pain of unzipping many gigabytes of zip files, concatenating chunks together etc and finally importing into virtual box, I finally got it up and running. This is the single-tier install and here are the specs of the virtual machine I am using:

This is running on my laptop which is an Intel i7 with 16Gb RAM.

Post importing, after changing the default user passwords (which the system prompts you to do on login), I set up the machine to use a static IP address (note I had the adaptor set on a host-only network). To do this I simply executed /u01/install/scripts/configstatic.sh and as I was happy to re-use the existing domain (ebs.example.com) I didn’t have to do anything thereafter. Ensure you create an entry in your windows host file for ebs.example.com for the static IP address you’re using though.

Starting up the instance is done in two stages – the database and then the app.

The database starts up relatively quickly on my machine, however the app takes literally forever! This is part due to weblogic server now being used in the underpinning architecture, and of course partly because it’s running on a humble laptop. It’s literally a case of start it off, leave it running, and go and do something else for half an hour or so. You’ll see it going through the various startup steps.

Eventually (!) you should see everything is done. Once you’ve successfully started then you should be able to hit the login screen on ebs.example.com:8000, which as you can see looks a bit different to the R12 vanilla screen.

Looks quite familiar doesn’t it… and it is really. There isn’t a huge amount that has changed, however it’s worth noting the top right of the screen where there is now the following which appears on all OA pages. This is a shortcut to your favourites, notifications, the navigator and settings. I do really like that, particular the navigator and the option to search for a function across all your responsibilities.

There are a few other differences on OA pages now as well, such as the ability to detatch tables (though I’m not convinced yet as to how useful this actually is), and the ability for users to select/hide columns in a table. There’s also the option of the simplified navigation page which displays your favourites in an App-esque manner. 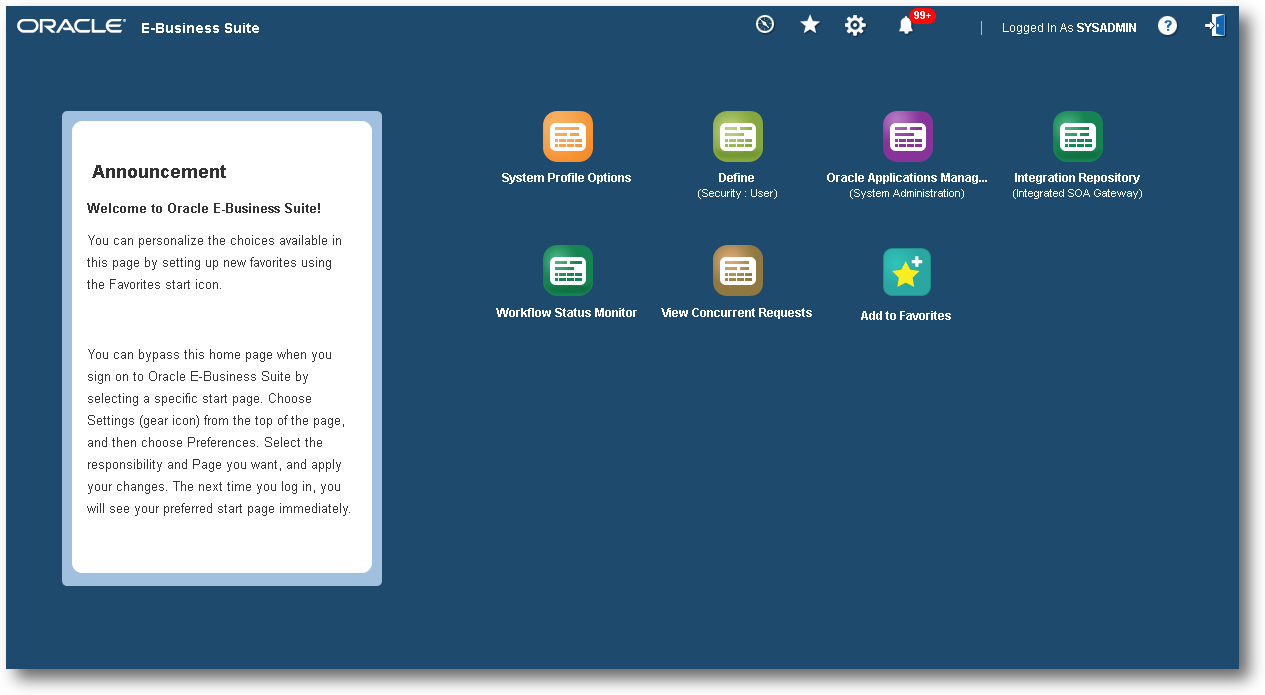 Whether this is going to be usable in the real-world or is just a nice bit of eye candy I’m not sure… Perhaps it might be nice for people using mobile devices and such (which I assume is who it’s aimed at), but I can’t see power users.

One of the main differences of the R12.2.x release however is online patching and how that affects the application tier. I intend to cover this in more detail another time so am going to omit is from this post, other than to say that from R12.2 onwards there are effectively two mirror application tops (Run and Patch) whereby the non-current one is patched and then the two are flipped so the patched one becomes active. That should be interesting from a custom development point of view, but again, more on that coming in the future.