Oracle have released the new Day by Day app for both iOS and Android and it’s rather good. There’s a great 6min video here https://www.youtube.com/watch?v=8q4foZyYQJc which I highly recommend watching, but I thought I’d share my first experiment with it.

I connected to my demo Oracle Analytic Cloud instance to use the good old Sample App test data. I then used the microphone to dictate into the app “Revenue in Americas for game station“. Yes – that’s right – I just dictated – asked a fact ( the Revenue ) for a dimension value ( Americas which is in Regions ) for a specific Product ( Game Station ). 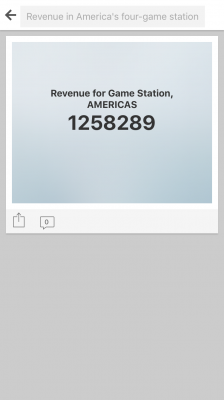 If you see how that was interpreted, it replayed “America’s” and “four” based on my diction and …. went and got exactly the right results!

I doubled checked this figure by actually going and querying it back using the traditional clicking about in the screens.

I then thought that what would be interesting would be to ask Day by Day the same question but also extend it out to say “by Year” and see how it handles that. Rather well it would appear. It initially gave me a line graph that I was then easily able to toggle to a bar chart like this : 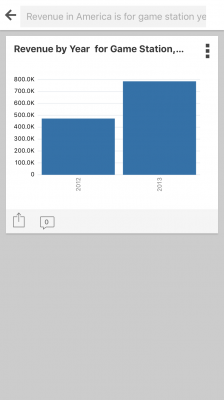 Pretty cool. I thought that I’d tell it that, so I pressed the “comment” button and commented on that 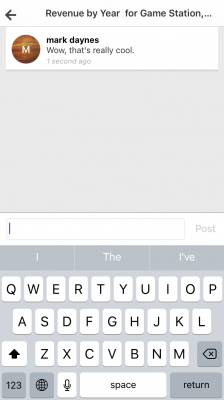 I can then also share that with my “Crew” – or colleagues – as there’s quite a bit of social engagement about it. 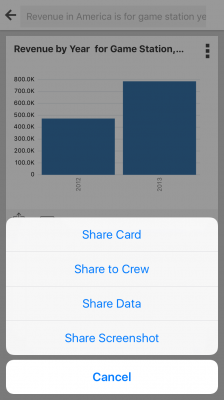 There’s a lot to like about this – not just the fact I can ask it questions and get instant answers, but also that it can do location specific stuff and give me a feed of things I’m actually interested in and also share that information with colleagues. I suggest that you do watch the video and if you need OAC/Day by Day setting up then please ask us!